THE STUDY OF THE TSUNAMI AFTERMATH AND RECOVERY (STAR) 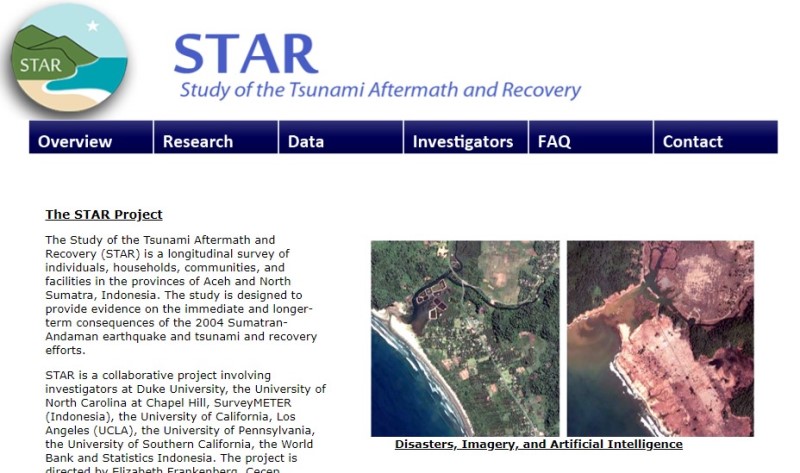 The Study of the Tsunami Aftermath and Recovery (STAR) is a longitudinal survey of individuals, households, communities, and facilities in the provinces of Aceh and North Sumatra, Indonesia. The study is designed to provide evidence on the immediate and longer-term consequences of the 2004 Sumatran-Andaman earthquake and tsunami and recovery efforts.

The December 2004 Sumatran-Andaman earthquake was one of the most seismically powerful events in world history. The resulting tsunami affected coastlines across the entire Indian Ocean. The greatest loss of life and property damage occurred along the west coast of Aceh, Indonesia. An estimated 169,000 individuals died as a result of the tsunami. The property destroyed by the disaster was worth an estimated 4.5 billion dollars. The post tsunami reconstruction effort, which was designed to rebuild and improve destroyed infrastructure, is one of the largest reconstruction projects ever undertaken in a developing country setting.

The baseline sample for the STAR survey consists of individuals living in households in Aceh and North Sumatra that were located, at the time of the tsunami, in a kabupaten, or district, with a coastline vulnerable to tsunami inundation. With help from Statistics Indonesia, we sought to interview all members of targeted households in the first post-disaster survey - STAR1 - which began in May 2005 and extended over the following 12 months. Our intention was to interview every household member age 11 and older at the time of the interview, and to obtain information about each child younger than 11 by interviewing the child’s parent or primary care-giver.

A total of 28,372 respondents in 7,157 households comprise the sample. Through the extraordinary work of our field team, we interviewed 96% of those people. We tracked respondents throughout Aceh and North Sumatra as well as to other provinces on the islands of Sumatra and Java.

We have completed five follow-ups of STAR1 respondents, which we refer to sequentially as STAR2 through STAR6. We fielded the first four follow-ups annually. STAR5, the last annual follow-up, began in 2009. STAR6, the ten-year follow-up, was fielded beginning in late 2014.

STAR is designed as a longitudinal survey. In addition to tracking and interviewing all STAR1 respondents in subsequent follow-ups, we also interview all members of STAR households in each wave. Many STAR respondents moved after the tsunami, and many of those who moved joined other family members in different households. The design of STAR means that these new household members are added to the survey. Many men whose wives perished in the tsunami went on to remarry, as did some women who lost their husbands. We have interviewed their wives and husbands. All children born to STAR1 respondents after the tsunami are also tracked for interview in every wave.