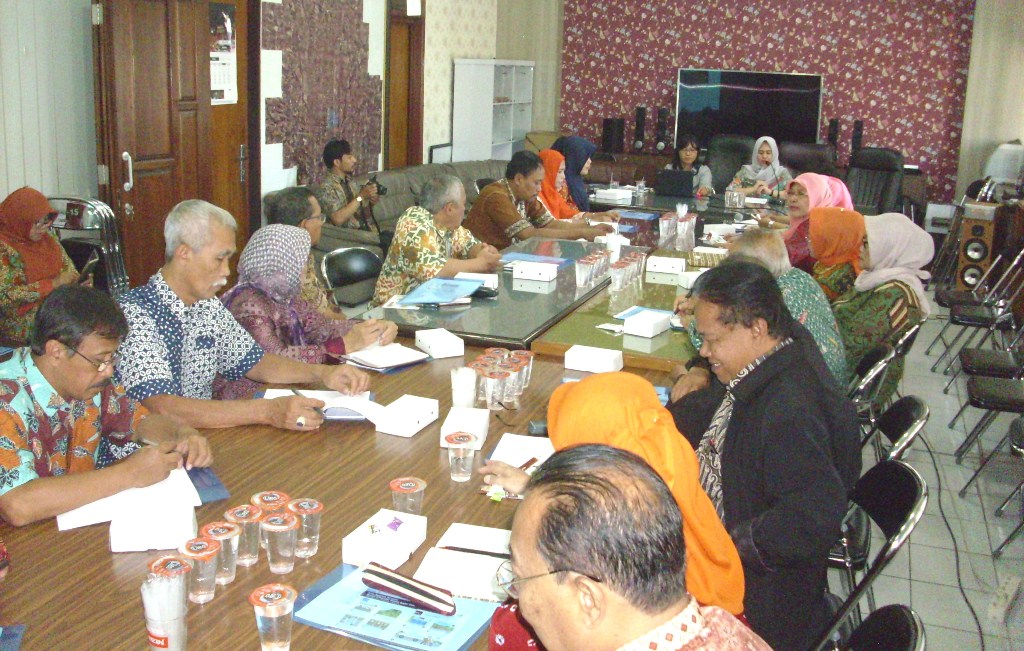 The study results were presented and disseminated to the research and development center and related government work units of Malang City, Thursday, May 04, 2017

The relevant government work units of Malang attended the meeting including the service offices of social, health, culture and tourism, transportation, cooperatives and MSMEs, manpower, education, Women's Empowerment and Child Protection and Family Planning (DP3A, KB), public works, Karang Werdha communication forum, and the administrators. The activity was designed as a medium to extract study data as the continuation of the 2013 Elderly-Friendly City Capacity Assessment Study.

It contains a review of the study results of the 2013 Elderly-Friendly City Assessment as well as a joint campaign to create an elderly-friendly community as is being programmed by other cities. It was also the beginning of data collection for the comparative study as a continuation of the 2013 study. The activity was interactive in that all participants presented and responded to the topic served as basic information for the study team prior to conducting further data exploration by conducting in-depth interviews and observations.

Setyo said, based on the results of a 2013 study, Malang City's efforts to achieve an elderly-friendly city in 2030—which refers to 95 assessment indicators in the 8 dimensions of an elderly-friendly city compiled by WHO—has reached a score of 45.2 (out of a maximum score of 100) or included to the color category of orange which is slightly above the national score of 42.9. By this achievement, Malang is already on the right track and has sufficient capital in realizing an elderly-friendly city, especially after the ratification of the above regulation.

Responding to the study team's explanation, the head of the Karang Werdha communication forum, Margi Wiyono, asked the research and development center to design a plan in an effort to pursue a green score so that Malang City gets the title of an elderly-friendly city. Adding to Margi, the Malang City Regional Regulation Number 13 of 2015 concerning Elderly Welfare as capital for development and a reference in implementing related policy programs. It contains 8 dimensions that must be considered in the implementation of the elderly policy program, such as religious service and mental spirituality; education, training, consulting, mentoring; health; employment opportunities; convenience in every using facility public infrastructure; social assistance and social protection; providing convenience in legal services and assistance.

The representatives of the Social Service said that apart from supporting the physical needs of the elderly, Malang City Government has also implemented spiritual activity programs for the elderly community, including special recitations for the elderly, posbindu, Karang Werdha, and so on. Meanwhile, representatives of the Health Service conveyed that the target of the Malang City Health Service was not only elderly-friendly but also elderly-friendly. They believe that the 2017 results of Malang City's score will experience a significant increase compared to 2013 ones, especially in dimensions related to health. Since the services at the Malang City Health Center were still joined from all age categories in 2013, while recently a special poly for the elderly is available, meaning that they are elderly-friendly. Likewise, posbindu is currently administered separately from the toddler posyandu.

Mrs. Lia from the research and development center expressed her high appreciation to the elderly who are also old activists who continue to be enthusiastic in carrying out the programs. Regarding the proposal from the Karang Werda forum, she conveyed that changing the achievement category to green is the goal of the Malang City Government by working together with related government work units.

The data collection for the study in Malang city was accomplished on May 16 yesterday. The study team obtained more detailed information regarding the progress of the elderly-friendly city policy program from a number of other informants from related government wok units. (SP/JF)