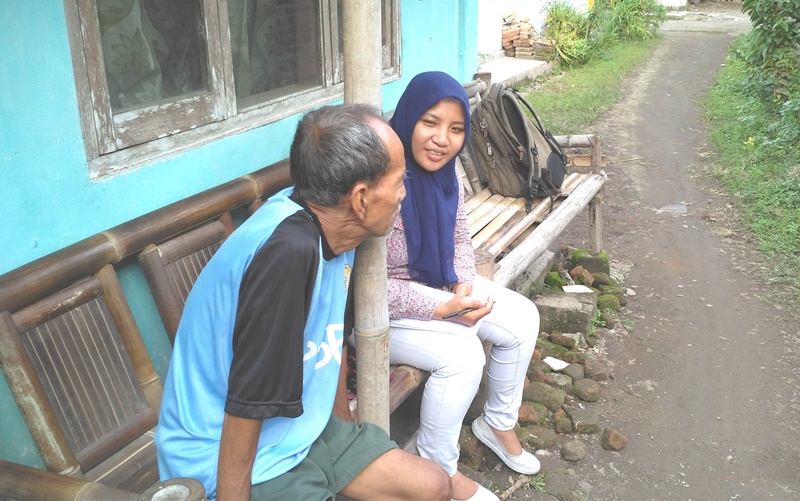 SurveyMETER implemented a self-initiated study for a knowledge product entitled “A Study of the Challenges and Prospects of Male Older Adults Participating in Posyandu for the Elderly”. It was carried out in five districts/cities in the Special Region of Yogyakarta. Field data collection was conducted for two weeks in early 2017, commencing from 3 to 16 January yesterday.

The study was carried out by applying a mixed-method approach, a combination of quantitative and qualitative. The qualitative informants and quantitative respondents were selected from the pre-elderly and elderly groups, both males and females, with age restrictions of 45 years upwards.

The quantitative sample area consists of eight urban/rural villages. There would be forty sample villages selected in total. Ten respondents plus one cadre of the elderly Posyandu were selected from each enumeration area. This quantitative approach is intended to provide supporting data to the qualitative one by measuring the percentage and number of each question indicator applied.

The qualitative approach was carried out in one rural/urban village from each district/city, but specifically for the Bantul district, there two villages were taken. So, the total number of qualitative samples in six rural/urban villages was divided into 3 rural villages and 3 urban villages based on BPS criteria. The purpose of the qualitative approach is to explore opinions and in-depth information from informants regarding the problems faced in terms of the low level of community participation, program activities, and support from the government, community, and stakeholders.

Prior to collecting field data, this study went through a series of preparatory processes that commenced in December 2016. Consisting of the instrument preparation process, pilot tests to pilot studies were conducted in several villages in the Bantul district and Yogyakarta City. (JF)