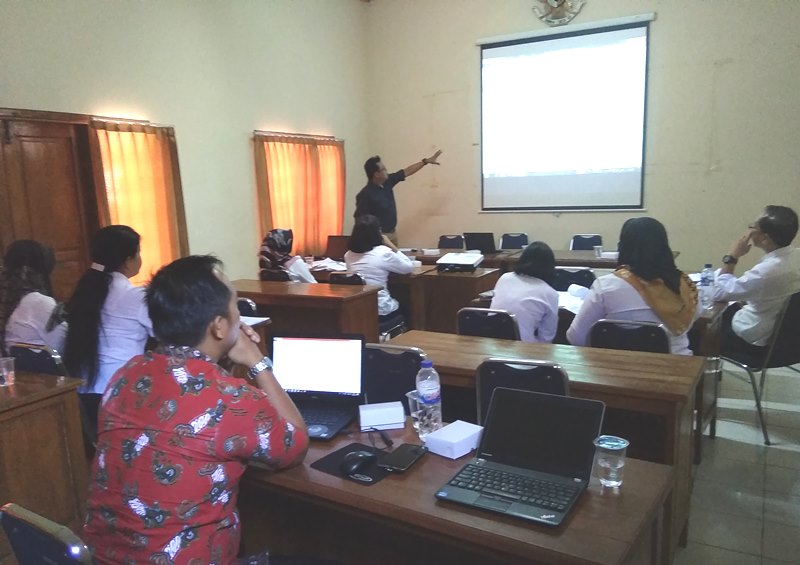 SurveyMETER collaborates in a program to develop an integrated data-based stunting management system at the puskesmas with the Nganjuk district government through the Health Office. It is carried out in 11 villages in Patianrowo sub-district involving three institutional components, namely the Nganjuk District Health Office (through the PIC of the Health Office, PIC of the Puskesmas, and village midwives), the village (apparatus and health cadres in 11 villages), and SurveyMETER (researchers, facilitators, and the electronic data process (EDP)/programmer team), and fully supported by the Knowledge Sector Initiative (KSI).

The activity commenced with a meeting represented by the person in charge of the SurveyMETER program, Dani Alfah, and the implementing coordinator, Roni Hermoko, with the Head of the Nganjuk District Health and at once the Head of the Family Health Division, Heri Wibowo H., on Wednesday, September 5, 2018. At the meeting, it was verbally agreed on the cooperation between the two institutions including the implementation schedule and the area. There was also presented about research instruments globally on that occasion. The Health Service Office is also responsible for processing permits and passing through the letters from Bappeda to the Regent.

According to Roni Hermoko, it would be effective for 6 months beginning from October 2018 to March 2019. The adjacent field activity after completing the instrument discussion was a pilot test of the instrument and training of village health cadres as prospective data collectors. The research would be carried out in two stages: the baseline study (October-November 2018) and the endline study (January-February 2019). During field data collection, health cadres would be accompanied by a facilitator from SurveyMETER.

Regarding the impetus for implementing the activity, the person in charge of the program, Dani Alfah, explained it is a form of effort to share SurveyMETER's knowledge with the Nganjuk district government through the health office that committed to making data as a reference for policymaking in the health sector initiating from the smallest scope, namely the village government, puskesmas, and sub-district. "We will learn and share together with the health office in implementing 5 data dimensions, launching from mapping data sources, data collection, data quality (quality control), data analysis, to the use of data related to the health of pregnant women and children," said Dani.

On the other hand, the Head of the Family Health Division of the Nganjuk District Health Office, Guruh Wibowo H., expressed his gratitude for the programs and stages that have been carried out by SurveyMETER. "We are looking for the factors that trigger stunting in Nganjuk district as one focuses of the national concerns on the health sector, and while we have to deal with the funding, SurveyMETER offers its activities, then, of course, we really support it,” explained Guruh regarding the motivation of the Ngajuk District Health Office in supporting the program.  (JF)