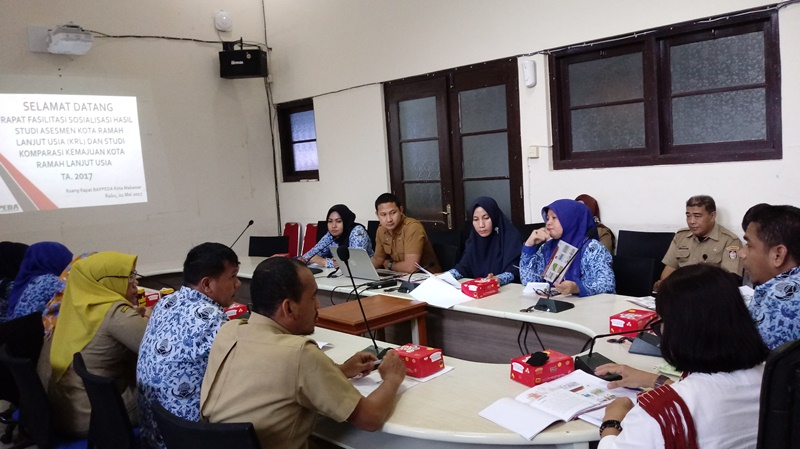 The presentation and socialization of the "Comparative Study of the Advancement of Makassar Elderly-Friendly City", Tuesday, May 2, 2017.

Starting in 2017, the Makassar city government plans an elderly program that is in accordance with the 8 dimensions of an elderly-friendly city compiled by WHO. This was stated by the head of socio-cultural affairs and general administration of the Bappeda, Amri Kabar, during the event in the meeting room.

In addition to Amri from the Bappeda, there were 23 policy and interest stakeholders from a number of related government work units service offices, such as political development, welfare, socio-cultural, education and sports, health, population and family planning, communication and information, social, and the women empowerment.

The presentation and socialization was delivered by Sukamtiningsih of the SurveyMETER study team entitled “Creating an Elderly-Friendly Community”. The material contains an explanation of the results of the 2013 Elderly-Friendly City Assessment Study and the encouragement to create an elderly-friendly city by 2030.

Responding to the explanation, Amri further stated that Makassar city has actually carried out several activities related to the elderly welfare program but did not know which dimension the program was running in. "But what certain is  the useful socialization for the government work units on how to encourage implementation towards an elderly-friendly city as soon as possible. I will study the results of the 2013 elderly friendly city assessment,” said Amri.

The response from other government work units, the education service just planned to provide an award program to the elderly who have excelled in sports in 2017, while the public works had repaired the sidewalks, one of which was on Losari beach, that friendly enough to the elderly and people with disability groups. BKKBN has carried out provincial level training for family members on how to provide elderly care.

Meanwhile, the health office has been running elderly the since 2016 called "home care Dottoro'ta". It is a free of charge homecare and health services for 24 hours. This service is simply dialing 112, then the Dottoro'ta car will come with paramedics complemented with telemedicine, tele-EKG, tele-USG and ready to take care the patients at home. However, it is not specifically for elderly patients. In addition, the health office launched the elderly community care hub program as an integrated service in a certain area that is driven and has been agreed upon by the community.

Starting in 2017, the Mayor of Makassar is promoting a healthy hallway program to be able to create a healthy environment. It is expected that all isles in the villages are laid out in such a neat manner, the roads are smoothed out, the residents' houses are required to plant flowers, provide reading rooms for children literacy, and furnish special hallways for smokers. He is also promoting a smoking free area. It impacted the elderly who live in the hallway will also be healthy, as well as the children can enjoy the reading room and play in the hallway safely.

The social office confirmed that there was no special program regarding elderly-friendly cities. It is in accordance with the provincial program, such as providing compensation and daily necessities to poor elderly people, free ambulances, and free shrouds if they deceased.

The responses from the relevant government work units during the events became valuable initial data in the study, especially to observe the progress of Makassar in realizing an elderly-friendly city in the last 4 years. To complete the next data, the study team conducted interviews and direct observations to the related government work units until data collection was completed on May 10, 2017. (SKN/JF)